The legend says, a ship was once stranded in a vicious storm off the Roman coast. All hope was lost and panic ensued, but one man, Marcellus, did not want to give in to the powers of chaos. He stood up tall on the deck among the crashing waves and took his position by the massive drum, for he was the Encourager, the Inciter — the Hortator of the ship. As he begun beating the drum, his inner rhythm united the sailors to fight the chaos, and the waves coming from the drum nulled out the waves of the storm, controlling the waters and ensuring safe passage.

The drum was long thought to have been lost. A young queen had stolen it in the hope of uniting the people under her rule, but had failed, for she did not possess the inner rhythm, and the drum had disappeared during the havoc of the uprising.

Many rumours have surrounded the legendary drum over the centuries. The latest one tells a story of a secret auction, during which the artefact was purchased by a famous producer and placed in his studio…

ThaLoops is bringing you the HORTATOR – virtual instrument plug-in of Marcellus’s drum. The drum sound is so versatile that it can be used in every genre. Add the tribal feel to hip hop beats, add suspense if you are film scoring, or make soulful rhythms for ballad song production.

Hortator features 6 types of kick and 5 types of snare samples. We’ve filtered out the best 99 samples total. Each kick and snare type has up to 12 velocity layers to provide realism and authenticity. Layer Hortator with drum loops, or use it solo. There are no limits or a specific genre for this drum, the drum of Marcelus, – the Encourager, the Inciter, the Hortator.

14 day money back guarantee
Have a question? Contact us 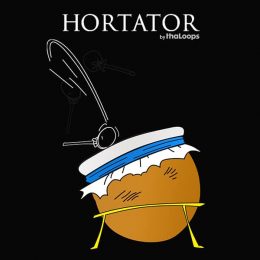