THIS PACK IS A PART OF

Claps were recorded in various environments from world-class studio rooms to big house porch, this way different characteristics of the clap sound have been captured. Microphones such as Brauner Valvet, Shoeps BLM-03C, AKG C-12, Neumann U-87, Beyerdynamic M160 in conjunction with class-a preamps were used in the recording sessions giving us plethora of frequency tones to build the punchy clap sound for modern music productions that today’s producer needs.

The pack includes 99 claps individually constructed and sorted into 4 types by folders:

“Small Klapz” are good for creating a rhythmic pattern (8th or 16th notes) where for example “Big Klapz” could fill the snare spots. “FX Klapz” is a selection of claps layered with experimental metallic, wooden, plastic and organic sounds. Layer two big claps and pan each sample to the left and right then add a medium clap to the center - you will get a huge clap for the big club beats.

The sound-set was designed for producers of various genres in need of powerful claps. With “99 Hip Hop Claps” you might have 99 problems, but a clap ain’t one. 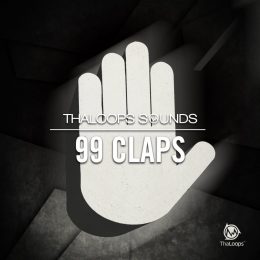